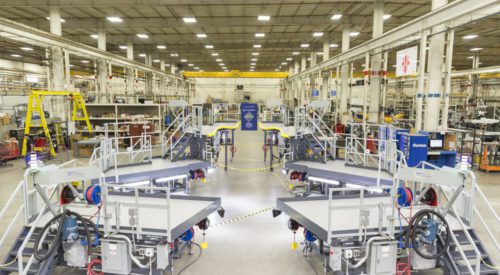 Macomb, MI – 1 May 2018. Global Tooling Systems, an Ascent Aerospace company and a leading provider of intelligent assembly systems for aircraft manufacturing, has been named by Lockheed Martin Aeronautics as an Elite top performing supplier for the second year in a row. The company is recognized for tooling and support provided for the F-35 Lightning II, including assembly jigs, work stands and other production tools for manufacturing the stealth multirole fighter jet.

“Excellence is not an exception; it’s a prevailing attitude,” said Janet Duffy, Aeronautics vice president for Supply Chain Management, quoting Collin Powell. “Our success in supporting our customers’ needs is highly dependent on the stellar performance of our suppliers. The top two percent of Elite Suppliers represent the standard of excellence of A&D performance in 2017, enabling us to deliver innovative, affordable and agile supply chain solutions that exceed customer expectations.”

Ascent Aerospace will host representatives from Lockheed Martin at their Macomb campus in Michigan on May 17, for an awards ceremony recognizing the large team at Global Tooling Systems that worked together to achieve this honor. Following the presentation of the award, there will be a facility tour of Ascent’s campus, including the company’s new demonstration cell, which features a new, state-of-the-art robotic fastening system for automated assembly of aircrafts.

Headquartered in Bethesda, Maryland, Lockheed Martin is a global security and aerospace company that employs approximately 100,000 people worldwide and is principally engaged in the research, design, development, manufacture, integration and sustainment of advanced technology systems, products and services.