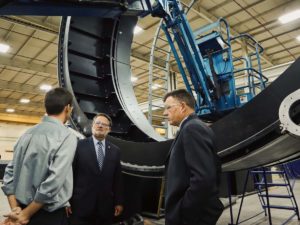 On Friday, September 20, 2019, Ascent Aerospace had the honor of hosting Senator Gary Peters at its headquarters in Macomb, MI. Senator Peters is a member of both the Senate Armed Services Committee and the Space, Science & Competitiveness sub-committee. His work within these committees has a direct impact in the fields of technology development, defense programs, space services and NASA.

The Senator’s visit included an Ascent Aerospace presentation by the Ascent leadership team and a tour of the Ascent facility. During his tour of the facility, the Senator was able to see multiple examples of aerospace tooling at various stages of their project lifecycles. In addition, the Senator viewed an advanced automated drilling cell for the defense sector, and an automated joining system for a space program. The Senator then addressed the employees, making clear his continued support for companies like Ascent that keep Michigan at the forefront of aerospace and defense manufacturing.

Senator Peters is very passionate about the manufacturing, defense, and aerospace sectors, which is in perfect alignment with the Ascent Aerospace business model. Regarding the visit, Senator Peters said, “Ascent Aerospace is a great place for me to visit, since it is a manufacturing leader in the aerospace sector. The capabilities of Ascent Aerospace and its skilled workforce, to engineer and build such advanced systems, contribute immensely to our country’s commercial, defense, and space programs”. He also emphasized his support for technology development, work to reduce skill shortages, and praise for manufacturing in Michigan.

Michael Sam, VP of Operations at Ascent Aerospace stated, “It was an honor to host the Senator at our facility. Senator Peters strongly supports the manufacturing community and confirmed to our employees their importance to the local and national aerospace industry. Ascent Aerospace is proud to support the aerospace and manufacturing industries here in Michigan, and we look forward to continued support from Senator Gary Peters”.

Ascent Aerospace is committed to challenging the industry norms, improving manufacturing processes and providing customers with the best solutions to meet their demands.

Ascent Aerospace is a world renowned, single-source provider of production and automated assembly systems for the aerospace and defense industry. As the largest tooling group in the industry, Ascent produces a full suite of both mold and assembly tooling required for the aerospace manufacturing market, including the largest Invar molds ever made for aerospace. As an automation provider and production system integrator, Ascent works with customers to develop their project and see it through from process engineering, to build and installation to ensure it is an efficient and cost effective solution. Visit www.ascentaerospace.com for more information.